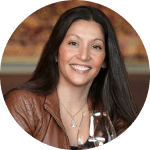 Theresa has a hands-on, Burgundian perspective with her winemaking, having worked in France at Domaine  de Montille. She trained with renowned winemaker Craig Williams at Freestone and at Joseph Phelps Vineyards  in the Napa Valley, after starting her career as an enologist for Saintsbury. Theresa was a Ph.D. candidate in  chemistry with an emphasis on enology at U.C. Davis, before leaving to follow her calling as a hands-on winemaker.  She has a bachelor’s degree in biochemistry from Cal Poly, San Luis Obispo.